To take full advantage of the JavaScript Development Environment, you need to know a bit about the tools we use. They're described as 'modern' here because that's what they are: tools used all over the world by developers of all kinds.

As custom app developers in FileMaker, we don't have to worry about these too much. But as we dip into JavaScript, GitHub and Visual Studio Code are invaluable. So let's learn a bit about them and provide a good reference for your continued study.

This first tool is really the end result. We're building widgets to fit inside our FileMaker apps. And you probably already know a lot about FileMaker Pro. However, when working with JS, there's a few things to make sure you understand.

When FileMaker 19.0 was released, we were given solutions to many problems we had to deal with before. Now, in FileMaker 19.3 and higher, almost every struggle or limitation we had is gone. Here are those:

This development environment is stored in GitHub, so it's important to know a bit about GitHub and the Git process. There are thousands of blog posts about GitHub, and I recommend you simply Google the word. Here's one I refer to once in a while.

For us, GitHub is the online cloud location where our code is stored. The specific repository (or repo) holds all of the files we are working with for a widget, and there's a connection between what we do on our machine and the storage space in the cloud.

Git is the process by which we can track changes, undo changes, and save changes to the repo in GitHub. Again, there's a ton of information out there about Git.

As we work with the development environment or the starter templates, there's a few git processes we'll use. Most of these are handled with buttons in VSCode, but you could also use the terminal to do so.

There are other commands, but again, VSCode handles most of these operations with a user interface. We'll look at that separately.

VS Code is the recommended code editor. It is full of features that make our JS developing lives easier. Its auto-complete, auto-formatting, and wide library of extensions takes away a lot of the stress of writing code for an app.

There's a lot to know about VSCode. We could spend hundreds of hours learning about it. For now, I'd suggest you read the following documentation to learn more about it. Eventually I'll have a list of the extensions I use for my VSCode work.

This environment is built to utilize what VSCode offers. So here is a brief walk through of the main sections that are used all the time.

NOTE: in the images here, the panels are on the right side. Yours will probably be on the left (that is the default). You can update it if you like.

The file explore section shows the entire structure of the repository's directory. 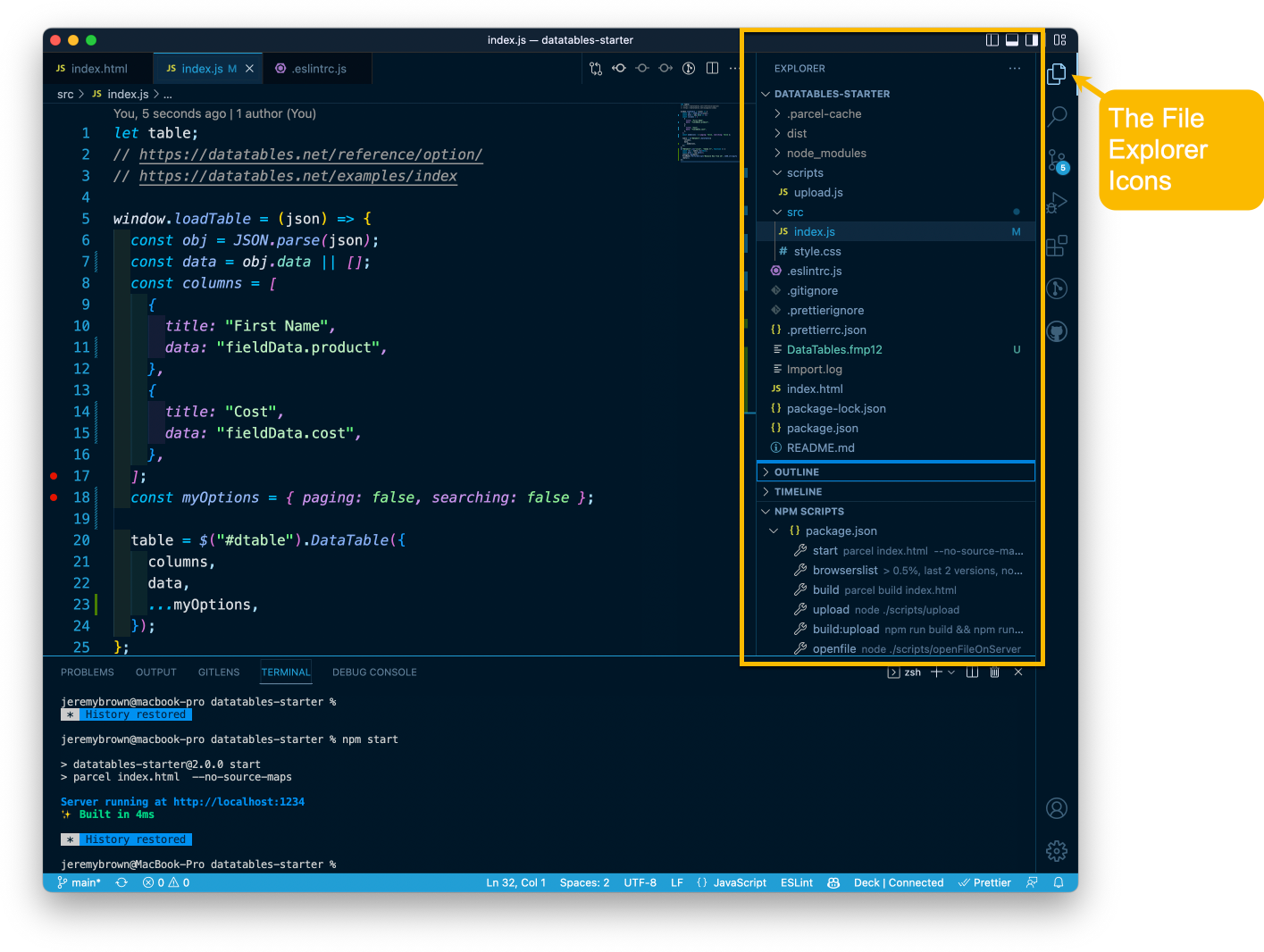 This panel also contains a few other sections: Outline, Timeline, and NPM Scripts

This panel contains a lot of good information about how the files have changed over time. 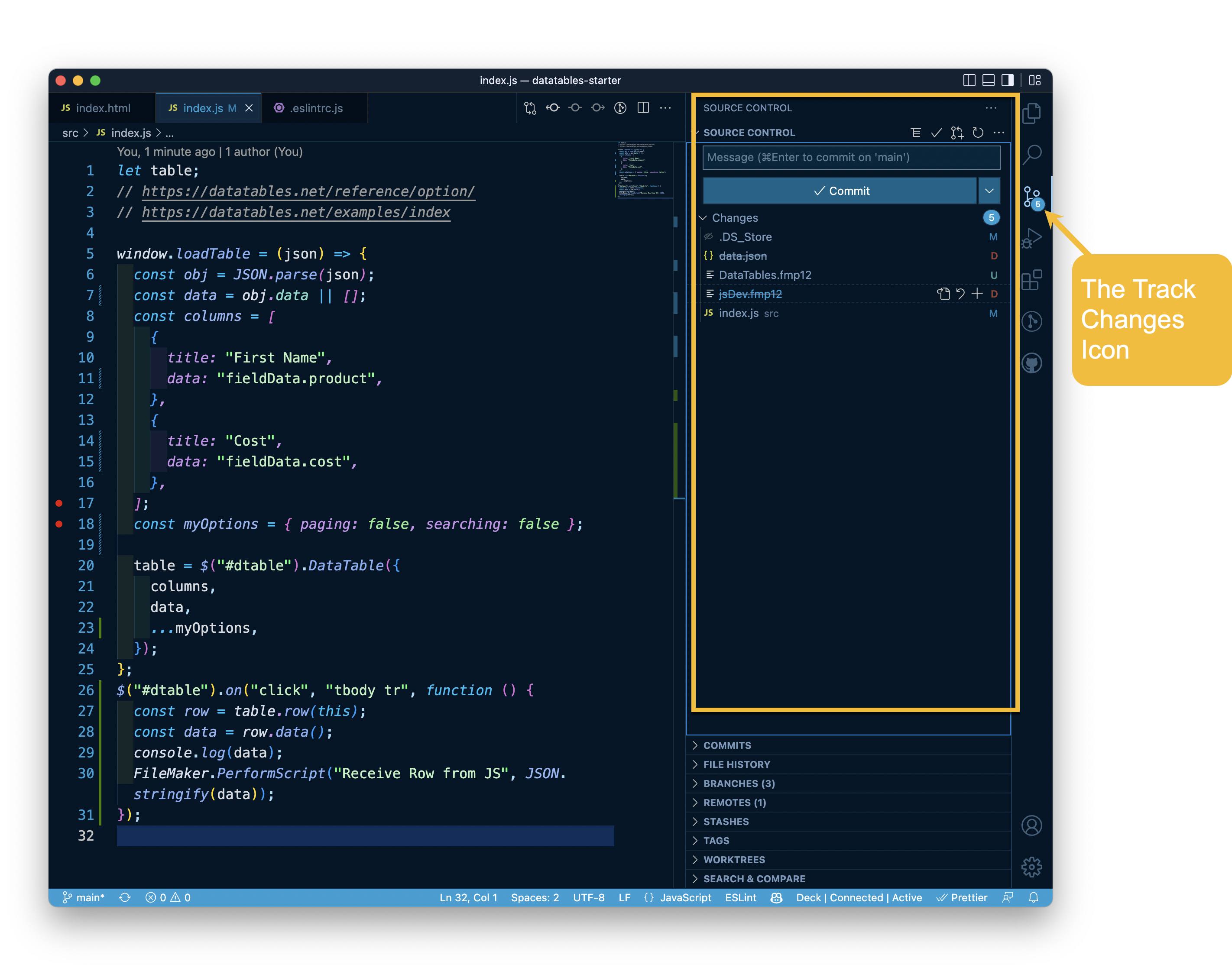 In this panel you can:

There's a lot here, and we'll have to get into more over time. For now the most useful section is the "Source Control" part of this panel.

VSCode allows you to search or search & replace acaross all the files. This panel gives you that functionality. It's useful when finding a function or variable or component. 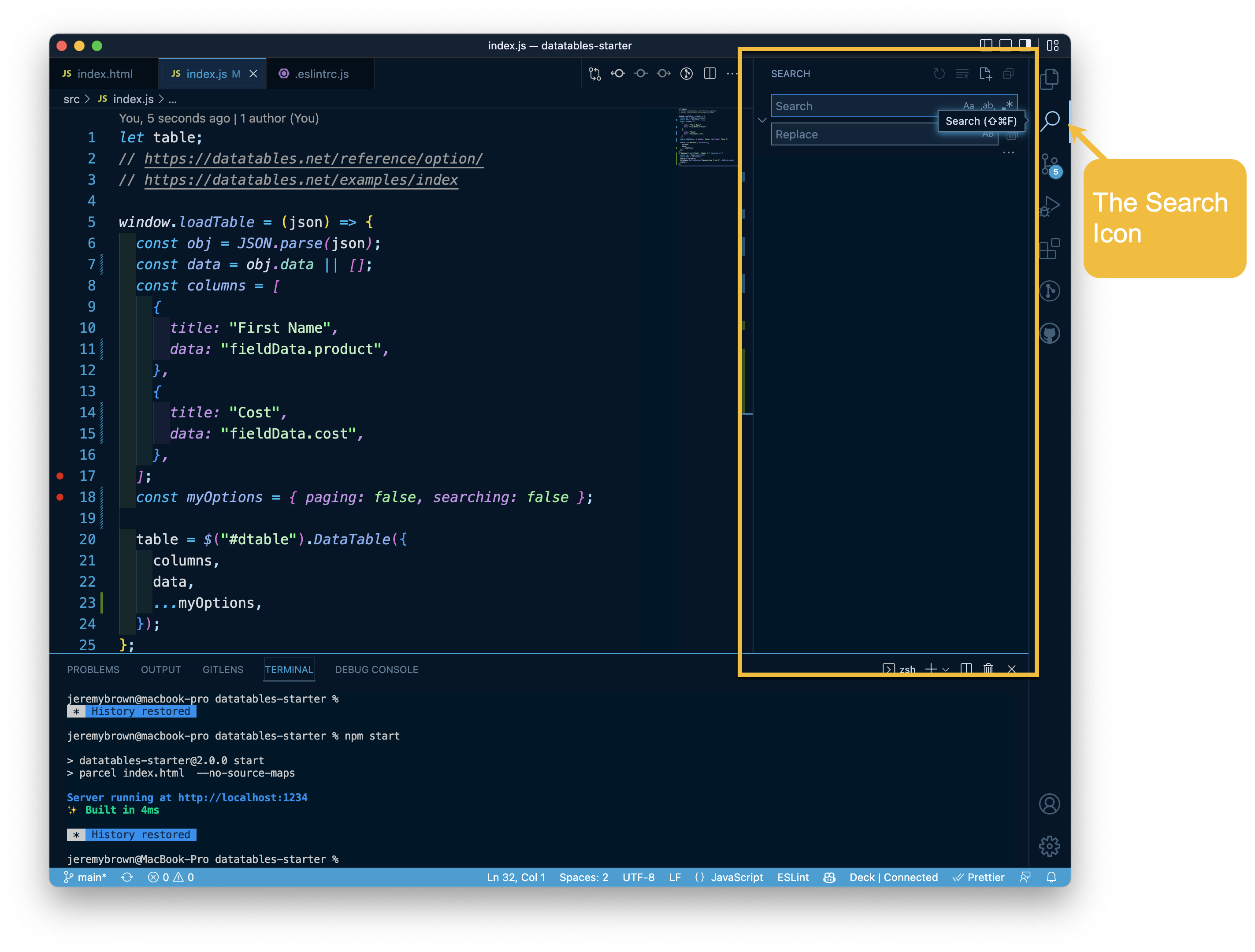 The Extensions panel allows you to add a ton of functionality to your workspace. 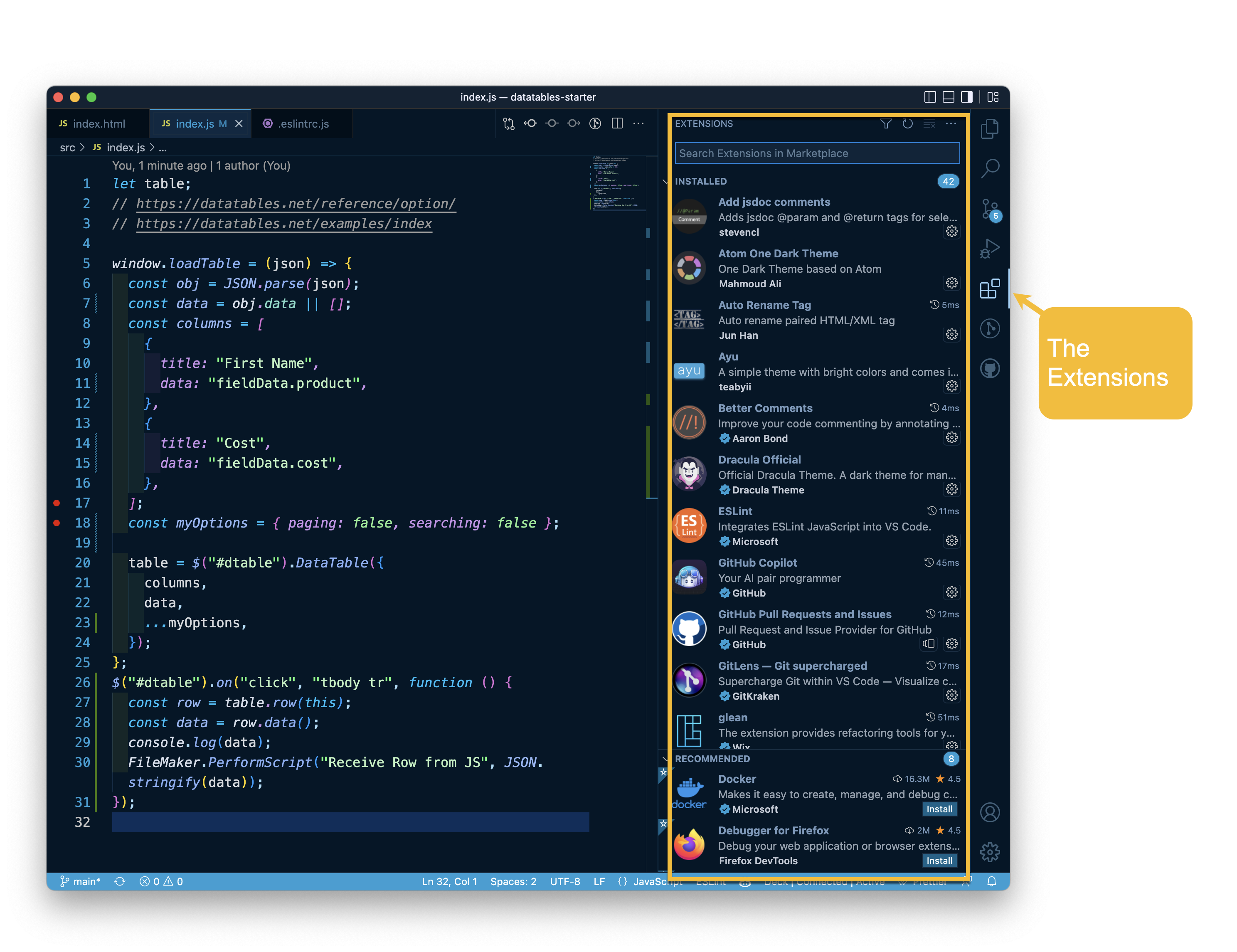 Here's a cool one written by Josh Willing: FileMaker VSCode. It contains FileMaker syntax and snippets you can write using VSCode's features and then copy into a FileMaker calculation. 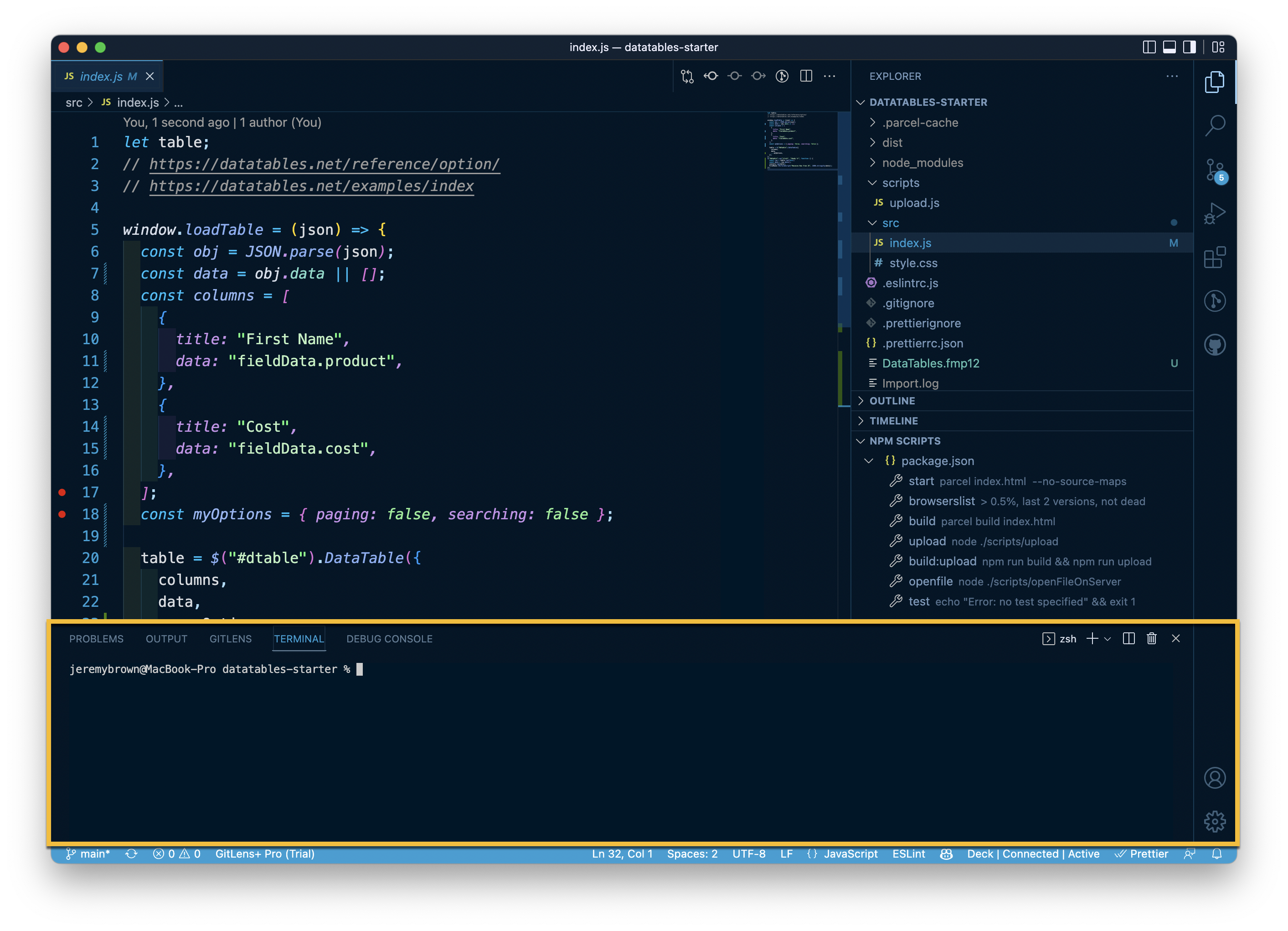 Everything in VSCode can be adjusted. In the Preferences / Settings section you can use the interface to toggle or change values of many different settings. Check this out, explore it and see what you can change. I might make a suggestion or two along the way. 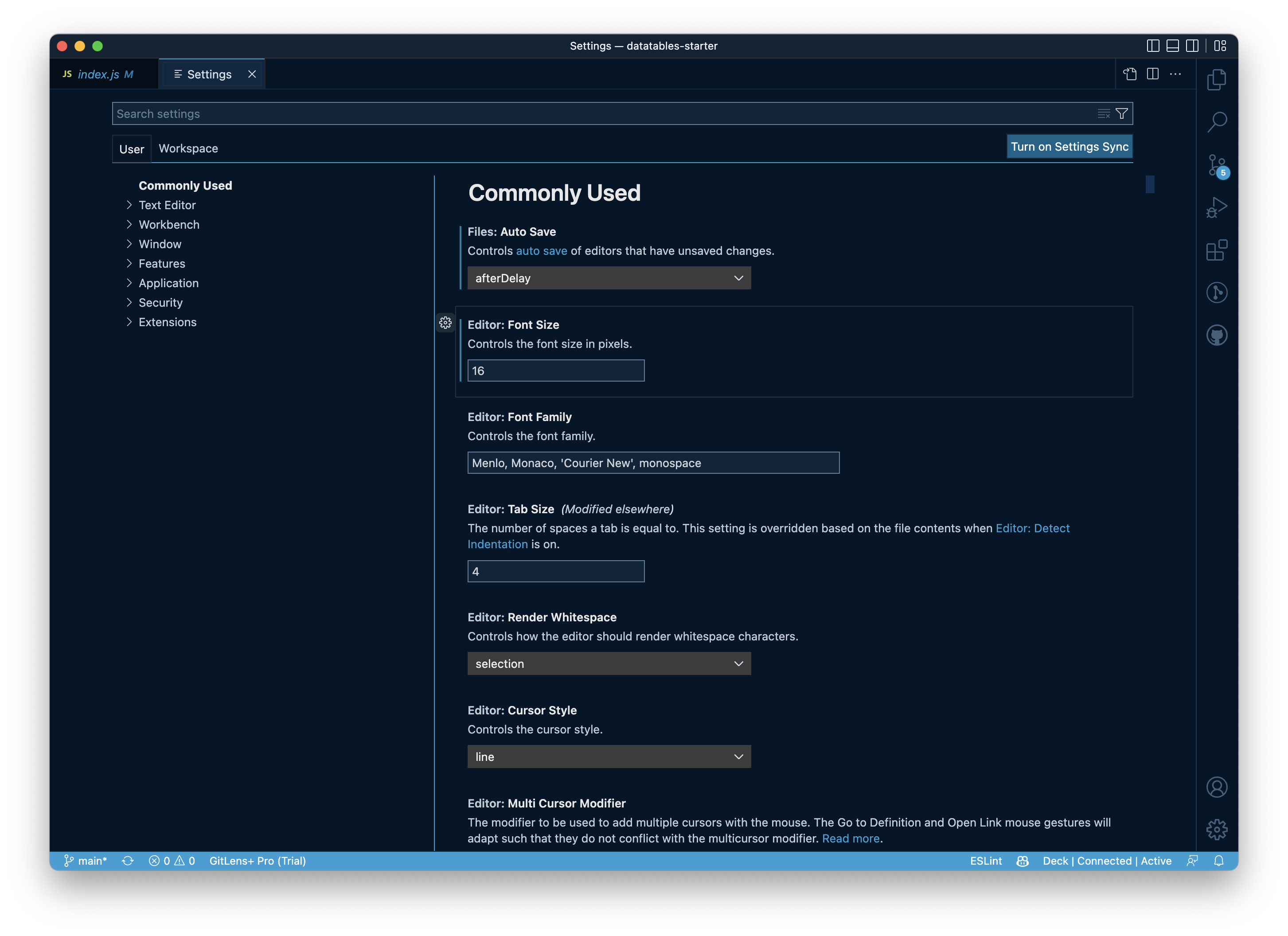 Previous
← Deploying the Code
Next
Under the Hood: What Makes all this Work →